How To Give Effective Feedback Remotely

In this article, I’ll discuss a few ways to get around that difficulty. We’ll start by learning what causes feedback sessions to get off track, how to prevent this from happening, and what to do when this happens.

This article is targeted toward designers and developers who are currently working remotely or are planning to switch to remote work.

You’re part of a remote design team in a small company that is currently having you focus on revising their to-do app’s design based on some customer feedback and some ideas that the company wants to validate. During your presentation to the company, someone interrupts you. With their camera off, they say: “Wait, why are we wasting time doing this? The existing page is fine. The older colors and layout were better and this new thing feels clunky. Just put the sign-up call to action at the top and be done with it.”

You’ve been doing this for a few years, so this isn’t new to, you but you still feel like you got the wind knocked out of you. You get flushed and a little angry, because this person hasn’t always been so unfriendly to you before, and you don’t want to look bad in front of the leadership. You start to stumble over your words, which you think makes you look bad. Now you’re in a downward spiral.

Why Does Negative Feedback Elicit Such Strong Responses?

Understanding how we route around this problem requires a brief discussion on how our brains perceive conflict. So, let’s dive into some neuroscience!

We’ll first discuss the three main levels of our brain:

When we are threatened, something called the amygdala (which is our brain’s “smoke detector”) sounds the alarm and does two things: it produces cortisol (a stress hormone) and diverts the blood flow from the neocortex to the lower levels of our brain. This means at this moment the part of our brain that thinks and reasons isn’t getting enough blood, so we become the real-life equivalent of the Incredible Hulk: just pure fight, flight, or freeze (only without the torn clothes and green skin). In his book Emotional Intelligence, Daniel Goleman calls this “amygdala hijacking.” It’s responsible for almost all of our conflicts going awry.

“An amygdala hijack is an emotional response that is immediate, overwhelming, and out of measure with the actual stimulus, because it has triggered a much more significant emotional threat. The term was coined by Daniel Goleman in his 1996 book Emotional Intelligence: Why It Can Matter More Than IQ.”

“Psychological safety is being able to show and employ one’s self without fear of negative consequences of self-image, status or career (Kahn 1990, p. 708). It can be defined as a shared belief that the team is safe for interpersonal risk-taking. In psychologically safe teams, team members feel accepted and respected. It is also the most studied enabling condition in group dynamics and team learning research.”

The tools that follow will help build and maintain psychological safety by signaling that it’s not a harmful situation. Remember, when you lose safety, it’s because someone’s survival circuits kicked in. Better put, psychological safety is the underpinning of all good conversations.

When there isn’t safety, resentment builds, feedback gets conveniently ignored, and people tend to clam up and not give real, helpful feedback.

How Can We Avoid It Going Sideways?

We’ll learn how to give high-fidelity feedback, share actionable and specific insights, as well as how to give a little conversational “first aid” by making refocusing statements.

Having a conflict when collaborating remotely causes us to lose what I call “high fidelity conversation,” leaving everyone at a disadvantage. Here’s my definition:

High fidelity conversation
It is a conversation in which all participants have access to the full range of human communication, including tone of voice as well as non-verbal cues, such as body language and tone.

As more and more teams work remotely, we lose out on vital conversational cues, such as body language and tone of voice, leaving us in the dark about what someone truly means when they speak. Let’s dig into why this is difficult so that we can frame up an appropriate response.

To start, let’s go over the different levels of conversational fidelity we can have and discuss what we lose in remote work communications:

The goal for these tough conversations is to have them in as high a fidelity as you possibly can. While email and Slack have dramatically reduced the friction for communication, it’s come at the expense of clarity and thoughtfulness. It’s far easier to send a half-baked email that leaves too much open to interpretation (remember the last email — or email thread — you got that was a forwarded email with just “thoughts?” included on a single line?). Plus, you’re at the mercy of the reader’s mood, state of mind, or distractions they experience, which could contribute to the missing key parts of your message.

When we lose conversational fidelity, our brain’s survival circuits activate and fill in all the gaps in the communication with negative assumptions, leaving us prone to misinterpret someone’s message.

There are times, however, when real-time communication isn’t an option, especially for fully remote companies with people spread all across the world. In that case, consider using a tool like Loom to give your feedback, or you could even record an audio message on your phone and upload that. In doing so, you still retain your tone and give them some body language to work off of.

Failing that, you’ll need to work a little harder to ensure things are taken well. Remember, you’re losing a lot of fidelity here, so you’ll need to compensate. Here are two of the best tips:

Ask For (And Give) Actionable Feedback On Specific Areas

When we start projects, we establish objectives and goals we want to achieve. Feedback sessions have exactly the same needs. So, when you gather people for feedback, be specific. Here’s a helpful guide:

We often mistake a client’s, a manager’s, or a stakeholder’s desire to contribute to your discussion for direction. But it’s not always so — generally, these people just want to help you solve the user experience or user interface design problems.

I’ve found Asana’s method to be particularly helpful here — you need to bucket the feedback into three buckets: do, try, and consider.

“A while back at Asana we noticed teams were laser-focused on shipping and would carefully ask if each piece of feedback was “launch blocking” at our launch reviews. Often non-blocking feedback would be brushed aside even if it was relatively cheap and would really improve the quality of the product. We reflected on what was happening and realized that we didn’t have clear language or norms on how to give or respond to feedback. And so, the Do, Try, Consider framework was born.”

— “Do, Try, Consider — How we give product feedback at Asana” by Jackie Bavaro 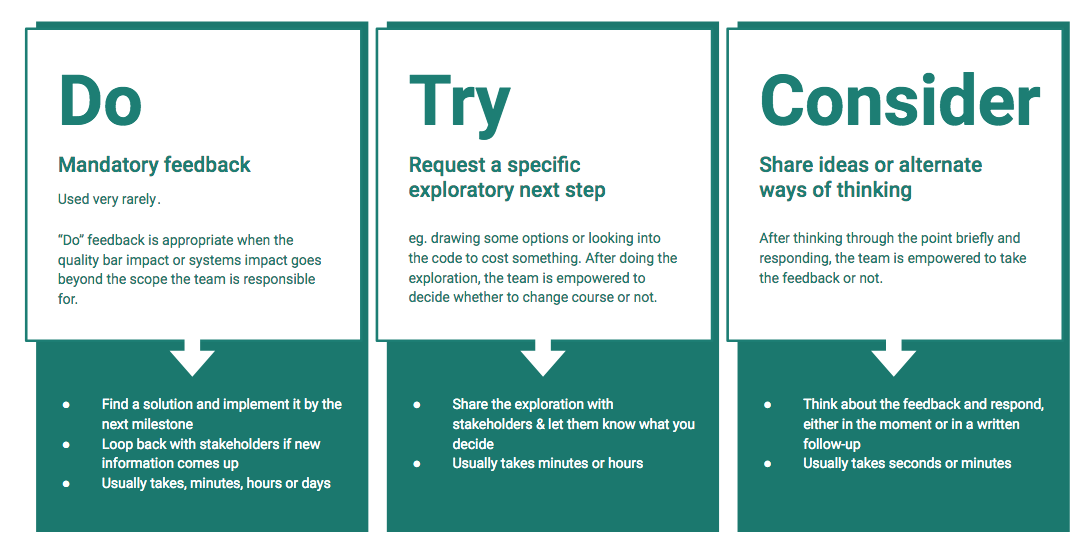 When giving feedback, you should give the person something to explore or try. For example, instead of “Put the sign-up call to action here,” try “What other layouts might help us achieve our goal?”

Every piece of feedback should also be directly related to a goal, whether that’s the design being on-brand, responding to someone’s feedback, and so on. And if you aren’t seeing a way to be more specific, consider asking the other person to ask what specific type of feedback they’re looking for.

Here’s how a feedback session could work:

Invite people to have several minutes of quiet ideation, adding sticky notes to a virtual board. Once the solo time expires, group the similar sticky notes and then discuss each group individually, bucketing them accordingly.

Here’s a little template that I made: 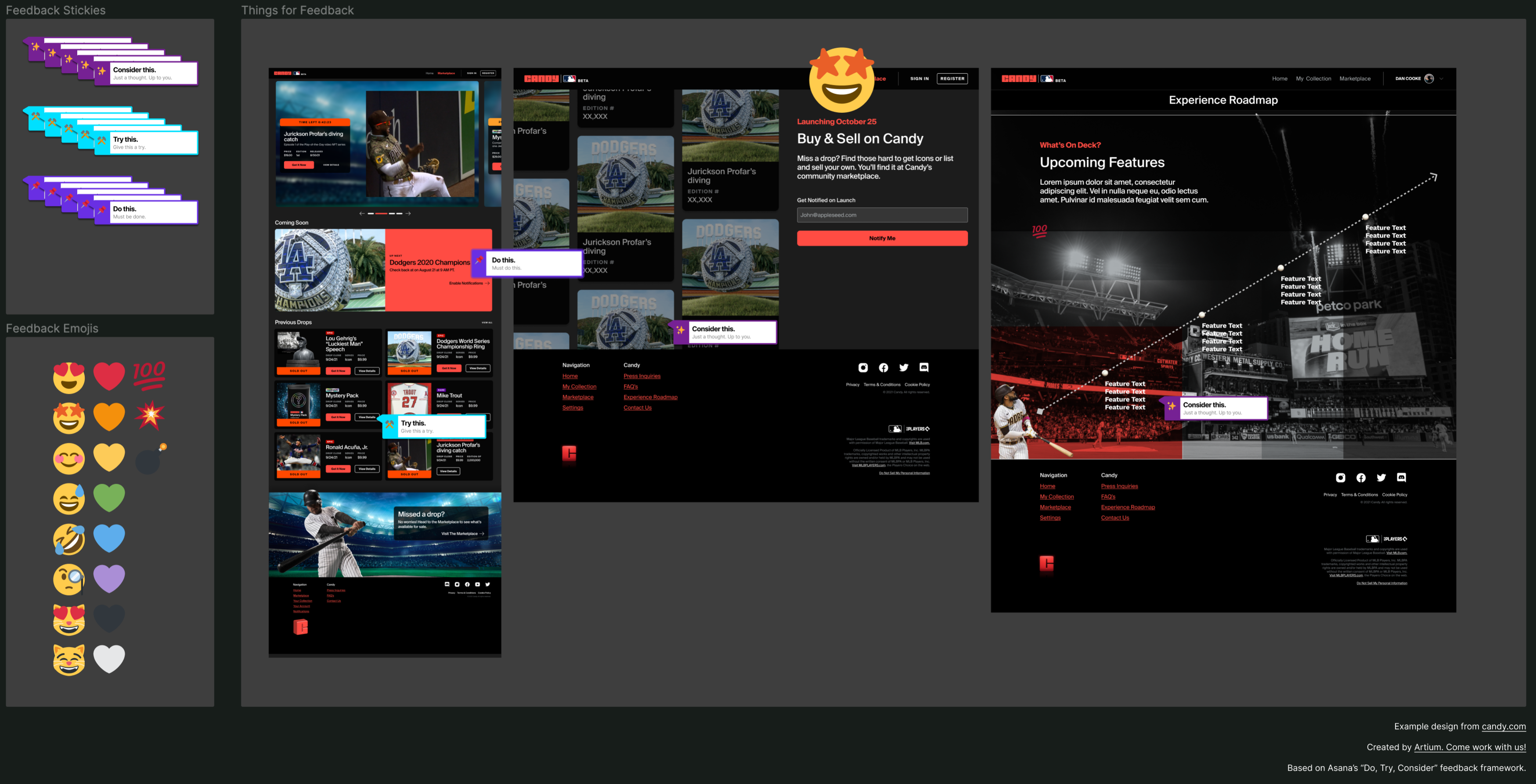 And here’s how this could look like in action:

Person A: “Hey Person B, here’s the latest prototype. I’d like to get feedback on the navigation structure for this app because I’m feeling a little tension with where the account settings are currently located. I’m also not sure about whether or not this design iteration is fully in line with the new brand look that we’re rolling out next quarter.”

Person B: “The account settings should definitely be not so front-and-center, I think we have to put them under ‘Profile’ to match the website UX. Also, I expected to see the buttons in our brand’s shade of blue and not the shade that you have used. Can we change the color?”

Person A: “Okay, let’s talk about the blue first. We didn’t have a matching shade that was also accessible (not enough color contrast), so I made a new one that was. Is this comment a must-do, try, or consider? Also, it sounds like repositioning the account settings is a must-do, is that right?”

Before we continue, let’s discuss what I mean by being kind. I don’t mean that you should go around giving empty compliments to people or avoiding telling them things that aren’t quite right — both of these are ultimately harmful. What I intend by saying “be kind” is that you are direct with the other person. You have hard, direct conversations because you care. That’s true kindness. (And of course, be polite.)

More people need to learn that a polite suggestion as feedback is far more likely to get action than a snarky or unprofessional comment. And don’t insult the people you’re giving feedback to. We’re all human.

How you frame the feedback has a direct influence on how it will be received. For example, which do you think is the better type of feedback?

I hope you chose the second option. 😄

When It Goes Sideways, Refocus

A refocusing statement is a statement that addresses the misinterpretation, reestablishes focus on your goal, and asks open-ended questions to ensure clarity.

Here are a few refocusing statements in action:

“I don’t intend to imply you’re not a skillful enough designer, I’m saying that this isn’t up to our team’s standards. We can &mdash, and we want — to help you get there though.”

“I’m not saying you have to do it my way. I know that you’ve got a lot more expertise in designing interfaces than I do. I just wanted to say that we need to consult with one another before sending the prototypes to the stakeholders because I’m responsible for doing the accessibility audits and don’t want any unnecessary back and forth to happen.”

“It’s not that you aren’t welcome to contribute to the user interviews or you aren’t a part of our team, your expertise in this is essential. Rather I would say that the type of questions you asked could taint our user research. Can we talk about how to reframe those questions?”

By framing the statements like in these examples, we actively address someone’s humanity and experience, and at the same time, we shift the conversation in a way that overcomes the objection or misunderstanding.

Note: Please, avoid ending these with “does this make sense?” These non-questions only serve to open the door for condescension.

And of course, give credit where credit is due — the inspiration for the refocusing technique came from Crucial Learning’s excellent “contrasting statement”, but I shaped it further to better fit my own practice.

In closing, let’s briefly recap some of the key points that I made in the article:

25 May,2022 Developing An Award-Winning Onboarding Process (Case Study)
24 May,2022 Lesser-Known And Underused CSS Features In 2022
21 May,2022 Kubernetes For Frontend Developers
20 May,2022 The Ultimate Free Solo Blog Setup With Ghost And Gatsby
19 May,2022 Smashing Podcast Episode 46 With Vitaly Friedman: Who Is Elliot Jay Stocks?